I agree Our site saves small pieces of text information (cookies) on your device in order to deliver better content and for statistical purposes. You can disable the usage of cookies by changing the settings of your browser. By browsing our website without changing the browser settings you grant us permission to store that information on your device.

Theia’s ultra-wide rectilinear lenses are based on our patented Linear Optical Technology®. Jeff Gohman and Mark Peterson invented this technology while leading the Advanced Technology group at InFocus Corporation, a maker of business and entertainment projectors. In 2002 InFocus decided to design an ultra-thin rear projection TV to compete with the emerging plasma and LCD TVs. This required a very wide-angle lens without distortion to enable a very thin TV. The TV was launched by InFocus and partner RCA in 2004 winning multiple awards including Popular Science magazine’s “Best of What’s New” in 2004. It was sold during 2005 and 2006 until InFocus and RCA exited the market when the price for plasma TV dropped precipitously.

In 2006 Gohman and Peterson obtained an exclusive license from InFocus to take the lens technology into other markets. They founded Theia Technologies and initially entered the security and military markets.

Theia was started with assistance from Japanese manufacturing partner Nittoh Inc. Nittoh is a well-respected lens manufacturer with plants in Japan and Indonesia. Lenses are designed in the US at Theia then further engineered to improve manufacturability and cost by Nittoh. The lenses are manufactured to ISO 9001 and ISO 14001 standards at Nittoh’s Indonesian plant near Jakarta. 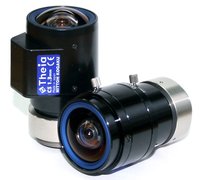 In 2007 Theia Technologies introduced the world’s first ultra-wide rectilinear lens for the security and machine vision markets. Theia’s proprietary Linear Optical Technology® allows the design of ultra-wide angle lenses up to 135° HFOV while nearly eliminating barrel distortion in the image; straight lines remain straight. Distortion correction is achieved optically in the lens without the use of de-warping software, allowing the lens to be used on any compatible format camera. The lenses are compatible with most security and machine vision cameras from high resolution analog up to 4K resolution.

In 2007 Security Sales and Integration magazine selected Theia’s first lens based on Linear Optical Technology® as a “show stealer” at the ISC East show and in 2008 Theia won the “Special Achievement in Innovation” award from the Security Industry Association (SIA). Using the same technology platform Theia introduced an IR corrected version in 2009, and a varifocal version in 2010.

In 2011 Theia diversified their lens portfolio with the introduction of their SL940 5-megapixel compact telephoto lens used widely for its outstanding performance in ITS/ANPR/LPR applications.

In 2011 Theia was also recognized by SIA with a New Product Showcase award for their innovative Image Resolution and Lens Calculator online tool and app for smart phones. 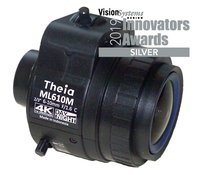 In 2016 Theia received awards and acclaim for their new family of compact 4k resolution lenses for the 1/1.7” sensor. Awards include New Product of the Year award in Video Surveillance Hardware and Accessories from Security Products magazine, Bronze Innovators Award from Vision Systems Design, Best Image Quality by Benchmark Magazine and Honorable Mention from SIA for their New Product Showcase contest.

Theia will be proud to be your optics solutions supplier. Contact us today to start the conversation!