I agree Our site saves small pieces of text information (cookies) on your device in order to deliver better content and for statistical purposes. You can disable the usage of cookies by changing the settings of your browser. By browsing our website without changing the browser settings you grant us permission to store that information on your device.

Today’s megapixel cameras have many advantages as long as you have the right lens for the job. When that includes covering large areas or reducing cost by installing fewer cameras, that lens is a wide angle lens. Until recently only fisheye lenses were available for an ultra wide field of view. Fisheye lenses create a curved and distorted image which no one seems to like. This significant distortion causes loss of resolution at the image edges.

In the past year a new rectilinear lens giving a different ultra wide view without the barrel distortion or loss of edge resolution of fisheye lenses has been developed. This report is an overview of wide angle lens technology and how we overcome fisheye distortion using Linear Optical Technology®.

The real world is full of three dimensional people and objects. Creating a representation of this world on a two dimensional plane in a camera creates some optical effects, especially when viewed through a wide angle lens.

There are two approaches used when designing wide angle lenses:

Most wide angle lenses including fisheye lenses have barrel distortion which comes from imaging equal angular slices of the world onto the sensor. A close kin, similar in application but different design, is to image equal planar distances in the real world onto the image sensor using a rectilinear lens. Until recently, rectilinear lenses were not available for wide angle applications. Theia Technologies has worked to develop this type of lens.

Rectilinear lenses keep straight lines in the real world straight on the image sensor. This creates an effect called 3D stretching or lean-over in which objects at the image edge seem to be stretched because they are being “flattened” onto a plane along the tangent angle from the lens. The wider the field of view (for rectilinear lenses), the more noticeable this effect. There is an additional benefit in increased resolution at the edges of the image because of 3D stretching.

The wide angle cousin of the rectilinear lens has the well known barrel distortion seen in almost all wide angle lenses with fields of view greater than 80deg, including fisheye lenses. This distortion causes the image to look curved and resolution to be reduced as the object moves farther from the center of the image. 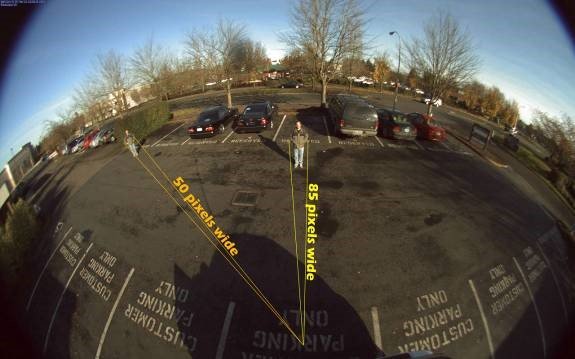 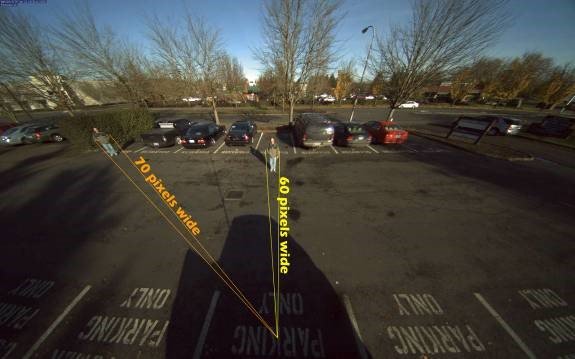 The same image taken with a rectilinear lens shows increased resolution towards the edge of the image.

The distortion effect can be eliminated with software (creating a rectilinear lens image) but at a cost in time or processing power. Objects at the edges of the image are compressed and detail information is lost. The information was already lost travelling through the lens and no amount of software (contrary to Hollywood’s view of video surveillance) will be able to recapture the information.